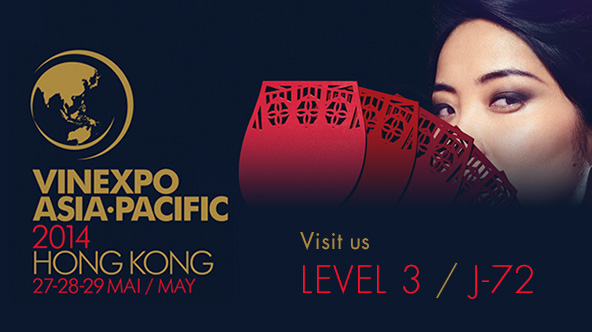 One month before Vinexpo Asia-Pacific opens its doors, the ambitious objective it set itself is in the process of being achieved. For the sixth Vinexpo Asia-Pacific in Hong Kong on 27, 28 and 29 May 2014, the international wine and spirits exhibition has increased its total area for stands by 50% and is confirming its leadership role in Asia.

To respond to a demand which has increased over the years, the 8th Vinexpo Asia-Pacific will offer 50% more space for stands. Six months before the exhibition opens, sales are brisk as growing demand from non-French exhibitors is being expressed. At this time, 87% of the total of 15,000 sq. m (161,500 sq. ft) has been sold and the number of stand sites reserved already exceeds the total floor area of Vinexpo Asia-Pacific 2012, which hosted 1,050 exhibitors from 28 countries.

“Our exhibitors know very well that by being present at Vinexpo Asia-Pacific they are visible at the very heart of the whole Asian-Pacific market. The exhibition is obviously a way of gaining direct access to China, but it also raises exhibitors’ profiles in all the emerging markets of south-east Asia. We need to bear in mind that 40% of the wine consumed in Asia is drunk outside China,” points out Guillaume Deglise, the Chief Executive of Vinexpo Asia-Pacific.

More international interest in the exhibition, as in Asian markets

France will still be strongly represented on 27, 28 and 29 May in Hong Kong at Vinexpo Asia-Pacific 2014. However the exhibition is clearly becoming much more international with intense interest being displayed from participants in Southern Europe, the New World, as well as from the spirits sector.

Non-French exhibitors have already reserved nearly 40% more stand space than in 2012 (6,500 sq. m – 70,000 sq. ft reserved already compared to 3,810 sq. m – 41,010 sq. ft in 2012), thereby confirming their interest in the exhibition as a springboard and business accelerator in Asian markets. At this time, Italy and Spain have increased their presence at the coming exhibition the most. There will also be more German exhibitors than participants from Argentina, Chile, Australia, South Africa or China.

Vinexpo Asia-Pacific at the heart of the business

Hong Kong has become an essential cog in the wheels of trade and distribution of wine throughout Asia-Pacific. By withdrawing the payment of duty on wines in February 2008, the territory has become a haven for the development of the wine industry. In the five years following the change in the law, wine imports from all points of origin into Hong Kong practically doubled, reaching a total value of €316.3 million in 2012 (*).

More widely in the whole of Asia, 3.6 billion bottles of wine were consumed in 2012 and the region also accounts for 61.5% of the world’s spirits consumption. There is currently a break in Chinese demand while distribution gets organised, but imports are still strong and continue in other countries in the region.

Launched in 1998 in Asia, Vinexpo Asia-Pacific has gained maturity and built a significant reputation over the years. It is located at the nerve centre of emerging markets and attracts more and more buyers to Hong Kong. A total of 15,800 visitors attended Vinexpo Asia-Pacific 2012, many of whom came from Hong Kong and mainland China, but the exhibition also attracted purchasers from all over Asia-Pacific. 31% more visitors travelled from Taiwan, 30% more from Japan, 14.5% more from Singapore, 28% more from Macao and 42% more from India as well as from Thailand, Australia, Malaysia and other countries.

All the factors are in place for Vinexpo Asia-Pacific to achieve yet another resounding success: the venue is in an hospitable city, ideal for growth in the wine and spirits trade; this city is a gateway to Asia which channels all ambitions; growth in consumption, which will clearly be sustained in the coming years; and the year 2014, whose diary is already filled with events to celebrate the 50th anniversary of Franco-Chinese diplomatic relations.